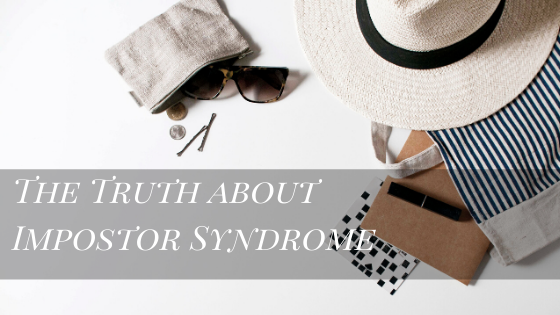 If you don't know the term impostor syndrome... It's defined as "a psychological pattern in which one doubts one's accomplishments and has a persistent internalized fear of being exposed as a "fraud""

It's the feeling that we're not as smart or as good as the people around us, and it's the sneaky inner critic that makes you hold back from a great opportunity, thinking "who am I to do x".  It's that feeling like you're running too fast, and at any moment you're going to trip and fall flat on your face.

I don't know about you, but I'm not a fan of that feeling.

Because here's the truth.

You aren't actually terrible at your job.

Your boss isn't actually sitting around thinking that you don't deserve a promotion and plotting ways to fire you.

You aren't actually unprepared for a promotion.

The reality is that impostor syndrome is just a FEELING that comes from an impostor message that's stuck in your brain.

A story that's NOT true.

A story that's making you feel like staying in bed.

A story that's like a movie you're watching over and over in your brain.

And I want you to turn OFF that movie.

I want you to  BANISH that message and move ​past those impostor feelings.

One way to move past impostor syndrome is to share stories and hear of other people's experiences.

So here's my story.

Check out the interview below with the wonderful Rebekah Weintraub, who coaches people on releasing their resentments to live the best versions of themselves.

In the interview, I share my impostor story and I give a few tips on handling situations when you feel like an impostor.  ❤️️

5 common mistakes when advancing to a Director-level role

5 simple things you can do when everything is chaos